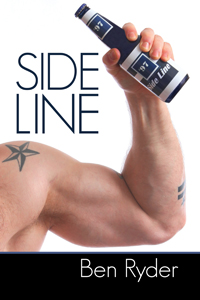 Having rarely experienced another man’s touch, US Marine Damon O’Connor doesn’t identify as gay, but that doesn’t mean he doesn’t think about strong hands or where treasure trails lead, despite his commitments back home. Damon’s sense of duty is strong, and he’ll stop at nothing to do what’s right, even if that means dying for his country.

While stationed in the Middle East, Damon gets what he least expects in the form of Jay Wells, an out-and-proud British beer promotions manager working in the area. Jay is content working his life away and has no time for relationships. Neither does Damon, as he’s days away from deploying to war. Until they met, love was the last thing on their minds, but they’re determined to enjoy it while they can.

Review: While labeled an Englishman Story each book is stand alone. I enjoyed the first book, Noah, and was looking forward to reading this one. This book was a lot more adventurous, complicated and longer. One thing that I found a little surprising was that from the blurb I was expecting this to be from Damon’s perspective and we only hear Jay’s voice. I liked Jay so it worked for me.

This book has a bit of a slow start, with the beginning focusing on establishing that Jay is very career driven and doesn’t have time or interest in a relationship. We finally meet Damon, who is not the voice of the book – which surprised me because of the blurb. Then bam! does the book pick up, and let’s just say that there was a bit of a misunderstanding. There was actually quite a lot of action in this one.

Jay is a sweetheart. He’s a salesman, he gets suppliers to buy his company’s beer, with a fun marketing aspect to it. He’s the guy running and MCing those parties where the very attractive young ladies in skimpy uniforms pass out Sideline beer and flirt with guys. I really appreciated how Jay took care of his girls. He cared about them and he didn’t judge or condescend to them, but always had their backs and watched out for them. I liked that he was loyal and supportive to the people he cared about and how he took care of his friends.

Damon was in a complicated situation, he was closeted to the point that he didn’t consider the hook ups he had with guys to mean anything about his sexuality. At first I thought he was a huge jerk, but as we learned more about him, his past, his life, and the many things that went into why he made the choices he did, I started to see him as a good guy who was doing the best he could.

Damon was hot!, who doesn’t like a big, strong alpha type soldier who can kick butt and protect his country? He was a lot more sensitive, shy, caring and sweet than I believed possible at first glance. Once the misunderstandings were explained and Damon stopped running and started talking, I began to like him and care about him. By the end I shared Jay’s fear of what would happen once Damon was deployed. I became invested in them both and started hoping that these guys would find a way to be together.

The sex in this book was intense and there were some moments that I found delicious. These guys run the range of sex and intimacy. I loved the way that their relationship developed and changed as they got to know each other. I loved that the author drew outside the lines and allowed them to express themselves however the evolution of the relationship and the men needed rather than prescribed rules.

For my sensitive friends I must warn you that there is a bit of dubious consent. It worked in the story and the person ended up very happy about what happened, but it is a little murky for a couple minutes. Everyone is okay but it could be a trigger for people sensitive to this.

I enjoyed this book, it took me by surprise and was richer and deeper than I was expecting. I appreciated how Jay allowed Damon the space he needed to discover who he was and what he needed and didn’t try to force him into anything. I loved that Damon finally got to have a hero for himself, instead of always having others assume he was big and strong enough to take care of everything on his own. These guys deserve another story, please.