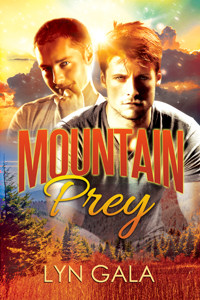 Blurb:  Stewart Folger lives in the Appalachian Mountains, where people take care of their family and follow the Bible. He feels that Appalachian pull in his blood, but that hasn’t tamed his wild side. A youth full of pranks left him with the nickname Stunt and a preference for danger in and out of bed. Other than a few contrary moonshiners who hate him for philosophical reasons since he’s a forestry technician and federal employee, he doesn’t have a problem in the world. Then one day he runs into Alex Soto, a man out for revenge.

Just out of prison, Alex knows firsthand that the justice system doesn’t treat poor and rich equally, so he’ll have to go outside the law to avenge his brother’s death. When an innocent man lands in the middle of his plans, he doesn’t know what to do… other than take him hostage. Unfortunately, he never planned on having to deal with Stunt or with the twisted logic that passes for reasonable in Stunt’s mountain home.

Review:  This book was surprising. After I read it, I texted Nina and told her she had to read this book, it was exceptional. There were so many elements that made this book great.

Stunt is a mix of Appalachian mountain boy, educated government employee who loves his work, and bad boy submissive. This complexity of character was incredibly appealing. From his deep mountain accent to his good sense and wisdom in dealing with the people of Appalachia. Stunt was strong and bold. He saw things others, especially Alex because he was an outsider, didn’t see. He was able to maneuver and help, even in seemingly hopeless situations.

Alex is a more straightforward man. He is tough because his life has given him nothing but walls to crawl over and grief to overcome. Alex just wants one last thing, revenge on the man that killed his brother. Even if it costs his own life and well being. He has nothing left anyways. Until he comes across a forest service worker in the wrong place at the wrong time. For the first time Alex sees someone and thinks maybe there is more for him. He see’s Stewart and his needs, desires, and although asking for help is the last thing he wants to do. Alex won’t let anything happen to Stunt.

The author does an amazing job of showing the culture of the Appalachian mountain people. We see a grouping of cultural values that push us away but also attract us. I loved that while this story was focused on the goal of getting vengeance for the murder of Alex’s brother and the comedy of errors that creates, it also gave us so much more.

Truly a surprise. A fantastic surprise and on my list of favorite books I’ve read this year.