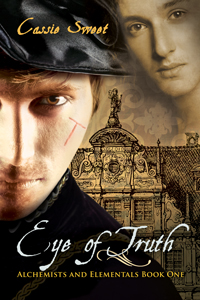 Blurb:  Theodyne Thespacian is a thief. Caught and imprisoned, he’s done his time and vowed never to return to the life of pulse-racing excitement and easy money. But when one of his former associates tells him about the Eye of Truth—an artifact that will open worlds of untold wealth—it seems like the perfect crime. However, for Theodyne, with the brand of a thief on his face, to be caught again means death. So instead he goes to the Villa of Nicodemus Valencia, the Master Alchemist who owns the artifact… and applies for a job.

Nicodemus descends directly from the founder of the Gold School, and of all those in that bloodline, he possesses the strongest gift for alchemy. His formulas have made him wealthy, though they’ve failed to give him the one thing he’s longed for most—love. When Theodyne appears at his Villa, he recognizes potential for alchemy and offers him apprenticeship. But then an ancient foe purged from the lands long ago reappears and threatens the Gold School, the Eye of Truth, and all the Dominical city-states. Nicodemus and Theodyne must now band together in courage to battle evil and can only hope they will not lose all they’ve come to hold dear.

Review:  I liked this book a lot. It took me a few minutes to get into the characters and story, but once it started to pick up it became a good mystery adventure full of magic, intrigue, betrayal and two men falling in love.

Theodyne is a man who refuses to be broken. He was imprisoned and branded to stigmatize and punish him for the rest of his life. His release finds him homeless, penniless and scorned at every turn. When he finds his way to Nico’s Villa and begs for work he is shocked to find himself instead taken on as his apprentice and treated with dignity and respect. A first for Theodyne and an irresistible lure. Suddenly the solitary thief finds himself giving his loyalty and trust to a powerful man who is quickly stealing his heart.

Nico has a rigid moral code. He lives his life by the tenets set down by his ancestors for alchemists. He also believes that everyone should be afforded kindness and respect, which was not a common practice for a man of his stature in their world. He is immediately drawn to Theodyne and finds that the line between mentor and lover is a razor’s edge that he cannot help but cross.

These guys were sweet together. The growth of their relationship from master and apprentice to friends and finally lovers was accelerated by the strange and dangerous situation that they find themselves in when Nico is summoned back to the Gold school. I liked the way that they saw each other and the respect and care they always showed. While the attraction was immediate for both men they have reasons to try to hide it from one another. This is of course impossible and watching them succumb was a nice aspect to an intense and complicated journey.

The world building in this on the magical side with the school and the alchemist world was well done and interesting. The world outside of that was a little vague. Overall I had a great time in this universe that seemed set in an alternate past. Where they rode on horseback and the only indoor lighting not made by candles was created with magic.

When I finished this story my first thought was that it was not the end. There will be more adventures for these men, which means more books for me to read. Score! If you enjoy the magic of alchemy, epic battles, intrigue and secret orders then you should check this one out.