B. G. Thomas Tells How He Found Summer Love

Healing With Faeries and a Magickal Gay Brotherhood

gather for a week or so to be together, learn together, teach each other and generally just

be there for one another.

I heard that most of these men followed an “nature-based religion.” That sounded

mysterious, but I had several pagan friends and they were all pretty darned cool, so I had

nothing to worry about there. No baby sacrifice or anything like that. Then I saw this

amazing episode of “Queer As Folk” where Michael and Emmet go to “Fairy Camp,” and

I was like…. WOW! That looks simply amazing! I don’t think I am going to come up

with a name for myself like “Dumpling” or “Clearday,” and with my body images, I had

doubts I would ever play nude volleyball, but the rest? Wow!

Problem was, try as I might, I just couldn’t find out where and when this thing was

goin’ on! Meanwhile, I dumped a terribly abusive lover—and man who did tremendous

damage to my self-esteem (and thus any possibilities of nude volleyball), to my spirit, to

my sexuality and my emotions.

Then to my surprise, within five months, I found a new man. Friends were worried that

was a little afraid myself—but nothing could be further from the truth.

I had somehow found on of those good men. A true man. A loving man. A real Knight in

Shining Armor. He wasn’t as worldly or exciting or well-read as my ex. But hell! Where

had that gotten me?

What’s more, the minute he heard about this men’s festival, he was just as excited as

I had been. And if only we could find it, I knew I wouldn’t have to worry about him

chasing the other attendees while my back was turned!

Then one Labor Day Weekend while we were camping at a big retreat center, we were

festival we’d been hearing about! We had just missed it by a month or so, but now armed

with the information we needed, we prepared for the next year.

And attend we did!

The event was nothing like we expect. However, it was just what we needed.

Festival is many things to many men but those who come back find something powerful.

No one is in charge; all members share equally in decision-making, and each man is

responsible for sharing in those functions necessary to the group, including cooking,

men, especially at the beach). Nor have I met the ghost of gay activist Harry Hay. At least

not directly. I’ve certainly met men who embodied the man and his principles.

The men who gathered at this event were and are some of the most loving, kind, spiritual

and healing men I have ever met in my life. They are not perfect. Yes there are a few sour

apples in the bushel. But for the most part?

Well, I would not miss the festival for anything in the world. The men there have helped

OMG! I’ve dressed up in drag and pranced around on stage lip-syncing to a song called

“Everybody’s Fucking But Me,” and another year I dressed up as a nun, sang the song

“” and I got to run and leap into the arms of six hunky men! Top that! Yes! I was on

Broadway….well… A version of it anyway. I certainly had my fifteen minutes of fame.

I have witnessed things that defy description. I learned not to care that I don’t have the

body of a god and shed my sarong and skinny-dipped with the rest of them. And I will

a muskrat swam in the midst of our little circle! Ha! One of my friends screamed like a

-year old girl and teleported to the beach. Oh, we laughed. And the muskrat? He rolled

his eyes and swam off. Just thinking about it has me laughing so hard there are tears on

These are men who understand. We don’t fit in. We see the world in a different light. We

love first and hate last and try not to hate at all. We hold each other when we’re crying

and don’t judge each other (or try not to). We respect each other’s spiritual and religious

Hindus and just about any thing you can think of. 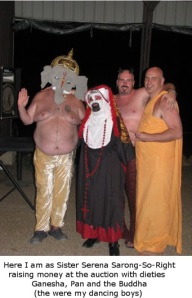 And there are some find cocktails to be had as well. Oh my! There has certainly been

more than one night through the years that I don’t remember going back to my cabin.

volunteered to help me get there.

These men have celebrated and supported my literary career too! They are so happy for

online. What’s more, when I asked them if I could write a novel about my experiences at

Festival there was not an objection one—at least not that I’ve heard.

And festival is pretty much what my new book is all about. I’ve renamed the campground

and re-dubbed the Festival. But if you read “Summer Lover” you’ll get a taste of what

believe in anything anymore. Not Santa Claus, the Easter Bunny, or God. Or love either

for that matter—at least, he knows no one will ever love him.

staying in one place for long. Due to a dark past he refuses to share or even think about,

he is willing to let men into his bed for sex, but never for the night.

sure he’s in the wrong place. And when Cedar connects with cynical, critical Scott, he

wonders how he could be falling in for this man of all men. But hearts and lives have

been transformed at the Heartland Men’s Festival before, and it might be just the place

where two very different men can release their pain and find true love at last.

And this is MM Romance. You know it’s going to have a happy ending, right?

This year my husband and I will be attending something like our twelfth festival. I can’t

wait. As a matter of fact, there is a good chance that while you are reading this I’m laying

out on raft in the middle of a lake with my faerie brothers. My friend Super Gem might

partner and I got legally married this year in Baltimore. Later we’ll fix a meal together

and sharing and listening. 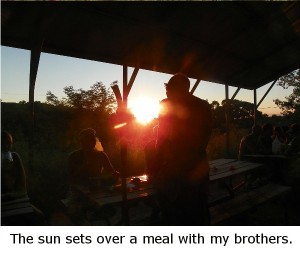 I can’t wait. Read my book and join me! I really hope you do. I’ll be waiting for you.

And in the words of one of my faerie brothers, “May we all dare to dwell in beauty,

B.G. will be giving away 5 copies of Book One in the series Spring Affair at the end of the tour

All About B.G Thomas

Greetings! I’m BG Thomas and I live in Kansas City with my husband of over a decade and our

I have a romantic soul and I am extraordinarily lucky to have many friends.

I love romance, science fiction & fantasy, horror and more, and I’ve gone to litertue and media

conventions my entire adult life, and been lucky enough to meet many of my favorite writers.

I’m a “Star Trek” and Joss Whedon fan from way back!

I have written all my life, it is where I find my joy. In the 90’s, I wrote for gay magazines, but

stopped because they wanted me to cut out story and romance, and write only sex.

Then through a few friends, I discovered the growing market of M/M Romance and was thrilled

beyond words. FINALLY, a way to write the stories I always wanted to write. Adventure,

romantic comedy, science fiction, and more, but with gay characters. And I wouldn’t have to

I very much believe in “The Law of Attraction” and that “thoughts become things.”

A lot of things all started happening at once for me! I heard the words, “Leap, and the net will

appear,” and something re-kindled inside. I sent out a story and was thrilled when it was almost

I believe that we are divine expressions of the Universe, each and everyone.

“It is never too late! Pursue your dreams! They will come true!”

You can find B.G. online at: