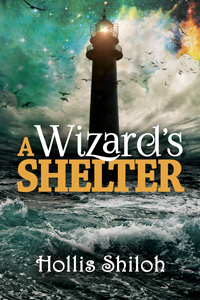 Blurb:  Visiting his sister Mary at the lighthouse should be a delightful vacation for Elliot–except he’s going there in disgrace while he awaits his fate from the wizard council.

Mary’s assistant, Rue, is a gentle, self-possessed young man about Elliot’s age. Elliot is drawn to him, and his magic seems to calm down around the handsome and mysterious Rue. Elliot sinks gratefully into the unexpected grace of Rue’s kindness and friendship. He doesn’t understand why his magic is broken or why it feels whole again around Rue. But right now he’s just trying to survive, grateful for the reprieve Rue’s friendship provides.

But then a potential tragedy on the beach culminates in Rue revealing his true nature: he’s a selkie, both man and seal, with a magic that somehow complements and heals Elliot’s when they’re together. And that might not be possible for much longer.

Review:  I loved this story. While there are elements that are familiar and well loved, this story felt new to me and there was a sense that I wasn’t going to be able to predict every little thing that would happen as it played out. It wasn’t like a mystery so much as something fresh and full of possibility. I was sucked in and I felt every moment of their story.

Elliot is so broken, even more than he at first realizes, when he comes home to his sister, Mary’s lighthouse. Something bad has happened and it has left him scared, unable to control his magic, and more powerful than ever before. He is bookish, clumsy, reticent and awkward. What at first appears to be arrogance on Elliot’s part, with understanding from time spent around him, becomes that shy awkwardness that stems from not always being in step with the world around him. He has an innocent quality. He has always focused on his studies, nothing else has ever held his attention. Until Rue, beautiful, confident, shining Rue.

Rue is marvelous. The more we got to know him the more I loved him. Any man who loves books and learning as much as Rue gets a dead sexy vote from me. Rue is so sweet and gentle, always taking care of Elliot and Mary, always willing to help and do for those around them in the village. There is no malice in Rue, no condescension – and Elliot is a clumsy mess who can hurt himself doing some of the most basic things possible.

Rue and Elliot’s immediate connection and Rue’s willingness to help Elliot control his magic was a gift. Rue’s fierce protection and defence of Elliot was wonderful. The bond that quickly forms between the two young men was intense, strong and beautiful. I loved what it came to mean to both of them and how it affected things for them. The physical, and I do mean affectionate, playful friendship, aspect of their relationship was sweet and innocent. The way that they almost immediately fell into a friendship that most people lose the ability to form once they reach adulthood was heartwarming and a balm that Elliot desperately needed.

The selkie aspects were great and helped to both build the suspense of will they/won’t they and made the HEA all the more believable. There was such joy in Rue when he was able to be in his seal form that it couldn’t help but spill over into him when he was a man.

The gay for you aspect of the story was very well done. It became apparent that it was simply Rue for Elliot and the gender was not important. Though it did take Elliot a minute to wrap his head around that fact. Elliot had never had any experience with either sex to draw from. There is a certain amount of sense to the idea that since social conventions and mores tend to expect heterosexuality if there is nothing to challenge that assumption then some people would simply never think to question if they might have more diverse interests. The buildup of tension between Elliot and Rue became palpable and left the ending a very satisfying one indeed.