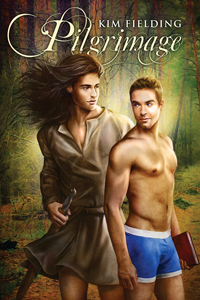 Blurb:  Fiscal analyst Mike Carlson is good with spreadsheets and baseball stats. He doesn’t believe in fate, true love, or fantasy. But then a fertility goddess whisks him away to another world. A promise has been broken, and if Mike is ever to return to California—and his comfortable if lonely life—he must complete a pilgrimage to the shrines of a death goddess.

A humiliating event convinces Mike to hire a guard to accompany him, and hunky Goran is handy enough with a sword, if a little too liberal with his ale. A man with no home and no family, Goran is deeper than he first appears. As Mike learns more about Goran, his disbelief wavers and his goals become less clear. Contending with feuding gods, the challenges of the journey, and his growing attraction to Goran, Mike faces a puzzle far harder to solve than simple rows of numbers.

Review:  I really liked this book.  It started a little silly, but I have enjoyed everything that Kim Fielding has written so I knew that great things were coming my way. And boy, did they ever.  I fell madly in love with these men and their journey and was almost as desperate as they were for their seemingly hopeless happy ending.

Mike is nice guy living a very boring life.  Boring numbers crunching job, which often impacts his social life.  Small circle of friends and family and one tragic (cheating scumbag ex) love affair that has left him seeking one offs and club pickups.  All of that changes one night when he is magically transported to another world where he must make a pilgrimage to appease a goddess who is angry at another man.  Which is all insane, unfair, seemingly impossible and the best thing that has ever happened to him.

Goran will crack your heart.  He is big and strong and protective.  He is guide and bodyguard to clueless Mike who has no idea how to survive in this strange world that seems to be from a century far in our past.  He has a dashing quality to him, he always happily does more than is needed or asked.  There is no doubt that Mike would not have survived his adventures during his pilgrimage without Goran at his side.

Something haunts Goren and causes him to drink.  There is a sense of secrets and deep pain to him that intrigues Mike (and us), we want to unravel them and heal him.  It becomes even more curious when we start to see that his drunkenness isn’t an addiction so much as an escape.

This is a love story that occurs during an adventure filled with weeks of travel and some scary encounters.  There is a ton of growth and sacrifice on both men’s part.  They grow closer and they support each other in ways that are completely foreign to Mike.  They bare their souls as well as their bodies and share everything with each other by the end of their journey.

There were moments that brought tears to my eyes and even a few that made me cry a little.  I laughed at some of the misunderstandings (Mike was so lost and confused and he kept talking about things that caused Goren to be lost and confused) and antics.  The element of the gods was funny and silly and a little sad/scary.

The Mike at the end of this book is a much richer, kinder, stronger, confident and altogether better man than the one we meet in the first chapter.  I really liked the new Mike.

An endearingly fun and charming read that kept me engaged and entertained from beginning to end.