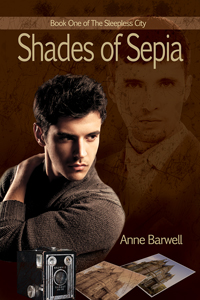 Blurb:  The Sleepless City: Book One

A serial killer stalks the streets of Flint, Ohio. The victims are always found in pairs, one human and one vampire.

Simon Hawthorne has been a vampire for nearly a hundred years, and he has never seen anything like it. Neither have the other supernaturals he works with to keep the streets safe for both their kind and the humans.

One meeting with Simon finds Ben Leyton falling for a man he knows is keeping secrets, but he can’t ignore the growing attraction between them. A recent arrival in Flint, Ben finds it very different from his native New Zealand, but something about Simon makes Ben feel as though he’s found a new home.

After a close friend falls victim to the killer, Simon is torn between revealing his true nature to Ben, and walking away to avoid the reaction he fears. But with the body count rising and the murders becoming more frequent, either, or both of them, could be the killer’s next target.

Review:  A very sweet, extremely cute, delightfully loving start to a paranormal series. With a cast of vampires, werewolves, a ghost and a beloved Kiwi soul mate.

Ben is a very nice young man from New Zealand who has no idea that vampires, shifters and other beings of legend exist outside of the graphic novels he enjoys. Simon is a traditional British gentleman who has lived through wars and suffered many losses while his body kept the appearance of the twenty-two year old young man who was turned into a vampire a hundred years ago.

Ben has come to Flint, Ohio on his OE (overseas experience) after finishing his degree. A sweet and friendly Kiwi, he’s found a job at a cafe that allows time for his passion of photography. Spending time taking photos in the park led him to meeting Simon. As the two dance around the intense attraction that’s hampered by Simon’s odd secrecy and behavior they find that they can’t seem to get enough of each other. Ben has never fallen so hard or fast, but he knows that Simon was meant to be his.

Simon knows exactly who Ben is from the first moment he sees him. He just has to decide if he can survive risking his heart by loving a fragile human, soul bond or not. Afraid to lose Ben when he finds out about the vampire thing, the courtship progresses with coffee and dinner dates, allowing not just the attraction to build, but also the friendship.

I liked these guys, and their friends. Simon is part of a team that helps investigate paranormal happenings, and at times deal with them. I am so excited to read more of these guys in the following books. They each deserve their own story, and happy ending.

I really enjoyed the world building in this story. The authors’ takes on some of the traditional myths were fun and added a sense of individuality to this world. The blending of our reality with the one in Flint was well done and pretty logical, if needing a tinge of suspension of disbelief.

There was something that I felt was hinted at with some of the comments and occurrences in the story that never happened. A little niggle, it’s left an itch and sense of things not finished. It seemed, to me at least, that there was an aspect of their reality that even the author wasn’t sure about that made me feel slightly less satisfied with their romance. I enjoyed the heck out of their story and read it all in one sitting and I’m planning to read the next book as soon as possible.