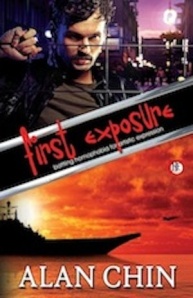 Blurb: Straight, married Petty Officer Second Class Skyler Thompson battles homophobia from his Navy buddies, the military, and his wife when he takes a second job creating flower arrangements at a gay-owned florist. But rather than yield to pressure and quit, he refuses to give up the joy of creating beautiful arrangements, battling homophobia for artistic expression. His dream is to leave the navy and open his own florist shop.

Ezra Dumphy—his shipmates all call him Dumpy because of his obesity—is a gay sailor who likes to dress in drag. He is shunned by his shipmates, tragically lonely, and uses drugs to cope with his solitude. What he wants more than anything is someone to share his life with.

Can these two men, opposites in every way, help each other achieve their dreams?

Review:  I came across this quote recently “Beginnings hook readers, endings create fans”, I don’t remember where I read it, but it came to mind as I started to write this review. I have been a big fan of Alan’s work since reading the first chapter of ‘Butterfly’s Child’. Alan’s writing always sits so well with me, I love his creative descriptions of the mundane to that of pure beauty. His words always flow so well on the pages, and his characters are not made to be unrealistically, hot or hideous. They’re perfectly natural beings, with real emotions and flaws. Not one character is too perfect to be real or too mysterious to be anything other than human. You could pass one of Alan’s characters in the street, meet them on your journey to work, work alongside them possibly or whilst hanging out with friends. Now it’s not because these characters are boring that I’d associate them with everyday life, but because Alan has the ability to give them life in the pages of his books.

The characters in First Exposure are not just a photographer or a painter or a sailor. Alan’s descriptions are expressed so well that you can almost hear the click of a camera, the flick of a paint brush and feel the crispness of a shirt. With each character all sides of their personalities are revealed, allowing you to know them intimately. A character you may feel uncomfortable with at the start could well be the one you fall in love with at the very end.

Petty Officer Second Class Skylar Thompson, is aboard the USS Abraham Lincoln supercarrier. Skylar is married to Rosa and they have a son, Hunter. Skylar questions his career choice as his family struggle to make ends meet on his pay from the Navy. This leads Skylar into turmoil over his actual career and that of his preferred, dreamed of vocation as an artist. Although he is popular and has friends on board his ship, he often feels uncomfortable in the company of the other men who are loud mouthed, shallow and crude. Skylar doesn’t like the sexual connotations made against some of his fellow crew members, especially one man, Dumphy. Skylar is a straight man but feels compassion and a little sorry for Dumphy, he admires Dumphy’s courage to stick it out.

Seaman Ezra Dumphy has had life pretty tough, he is a young gay man with a love of photography. Never without his camera, Ezra is fascinated by Skylar and craftily steals shots of the man. I really liked Ezra as he is a survivor, Ezra falls into terrible situations. Life has a habit of kicking him where it hurts, but he’s a toughy and despite his appearance he does his best to take care of himself. He wants to be loved, have friends but he doesn’t suffer fools gladly and he gives as good as he gets. With a father who beat him and a mother who doesn’t appear to have protected him, he spent much of his teens living on the streets.

When Skylar and Ezra are brought together serving aboard the same ship they unexpectedly find themselves looking out for each other. Through this story their worlds collide leading them to new friends, new lives and sanctuary, but it’s not without tribulation. Fueled by resentment and revenge Skylar and Ezra have to first sail through some very rough seas.

If you love a gritty tale, true friendship and forgiveness you’ll not be disappointed here.