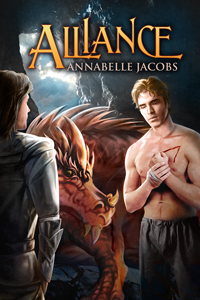 Blurb:  King Ryneq and his dragon rider consort, Nykin, return to Torsere to defend the kingdom against the lowland armies already camped along Torsere’s borders. Seran wants the dragons, and with a new witch in his ranks, war is inevitable.

With the elves of Hervath now helping them, Ryneq has a chance at holding Seran at bay. But the witch is using old dark magic, and as Nykin and the dragon riders battle her deadly attack, unexpected betrayal forces Ryneq to make a difficult decision.

Faced with the prospect of losing his kingdom, Ryneq gambles on a plan that could ultimately save Torsere, if they can stay alive long enough to see it through. With Ryneq standing against Seran and his witch, time is of the essence, and Nykin must make a sacrifice to end the war. Only then will Ryneq and Nykin be able to start a life together.

Review:  Another exciting and fun installment in a series that I always enjoy immensely. Book three maintains and increases the intensity of the previous books.

Ryneq and Nykin are still very much in love. They are so attracted to each other and affectionate. They don’t waste time on petty crap, but appreciate their relationship and don’t take one another for granted.

These poor guys can’t seem to catch a break. Their romantic relationship began during a hostage situation and a seemingly impossible rescue mission. Their marriage began with the beginning of a war that threatens their kingdom. And now they’ve returned home from the elves kingdom to find themselves under siege and fighting a losing battle. I’m really hoping that we get another book where these men get to be happy and actually see who they are outside of the danger and war.

Things get dark for Ryneq and Nykin and they’re separated. It’s up to Nykin and Fimor to save the day again. Everyone must make serious and dangerous sacrifices.

Nykin and Fimor’s bond is tested beyond anything they’ve experienced before, which for these two is saying a lot. The connection and love that they share is beautiful and beyond the magic that bonds them, they always choose each other.

This witch is even nastier and more dangerous than the one in the last book. The greed and desire of the evil bad guys for the dragons and their magic is outmatched only by the loyalty and devotion of the people of Torsere. I love that about them, there is never any question that they will do anything but fight to save the dragons. You have to respect a people who remain loyal in the face of such scary and dangerous threats.

There are a few moments throughout the book where things look hopeless and I was worried for them all. Everyone is in danger and there are painful losses. But there is also new love and deep friendships, and as always the magic of dragons.

A great series that is romantic and engaging . A world that is full of magic, elves and dragons! Stories of intrigue, war, friendship, and a love that has thrived in harsh adversity.