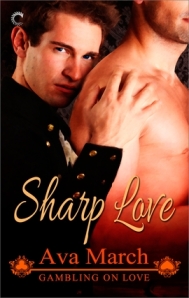 Sequel to All In With the Duke

William Drake has lived among thieves, bastards and beggars all his life, doing what’s necessary to survive. As a young orphan, that included looking after his best friend, Jack Morgan. But as they grew older, Jack took the honest path, leaving Will behind to fend for himself the only ways he knows how.

When an unsavory errand for his employer brings Jack back to London’s underbelly, he needs Will’s help. It’s there, among the alleys they ran through as children, that the love he’s always felt for Will returns. As their nights together grow hotter, Will discovers something new about his old friend—Jack’s need to serve extends into the bedchamber.

Will has never fully abandoned his dream of escaping London with Jack. But what could the Duke’s driver want with a dishonest cheat like him, beyond a bit of rough sex? It takes the gamble of Will’s life to find out if he can win Jack’s heart…

Review:  Ava March has a way of making historical M/M feel complete. This story encompasses all the elements that make historical romance great. All of the struggles with the culture and laws come into play along with lifetime friends finding more in each other.

William Drake walks a fine line. He is saving up for his escape from London the only way he knows how. Gambling. He is pushing hard to leave and knows that only risk can get him all the way. Unfortunately it’s that very risk that puts all his dreams and his well being in danger.

Jack seems to show up anytime William needs him. Jack wants so badly for his friend to stop putting himself in trouble and tries desperately to show him another path. But Jack needs Williams help. He just needs him. So they work together to find someone for Jack’s boss, the Duke. As well as bodyguarding the Duke’s lover.

The thing I loved about this story is the constant struggle. Jack’s worry versus his respect and trust in William. William’s pride over Jack’s friendship. Both tempered with a beautiful lust and longing for more.

They know the restrictions society and culture at large place on them, but there is something great in watching the push and pull inside of that struggle.

I also loved experiencing the lay person point of view. Usually in regency romances, m/m or f/m there is an aristocratic element. But this story is about two men who have to work to survive. They’ve had to for their entire lives and because of that work, and lack of privilege it makes for a great shift in what, we the reader, are used to.

This book has a different feel from most of Ava March’s works, but I enjoyed it just as much. Although this is book two in the series you can read it as a stand alone. I still highly recommend this and the first book in the series. A great example of beauty, honor and pride woven perfectly in a love story.