For The Bite Of It (Orbus Arcana: Book 1) 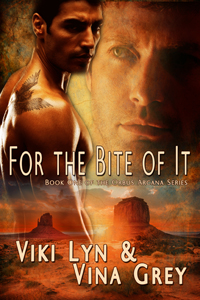 Blurb:  Book One of the Orbus Arcana Series

A vampire, a cupcake, plus one sexy cop, is a recipe for trouble.

VINCENT KAMATEROS is an exiled vampire making a routine living as the owner of a cupcake bakery in Arizona. Until a car with a dead driver crashes through the wall of his shop, bringing after it, All-American, closeted cop, JOHN REEDER. Smitten the instant he sees John, but bound to silence by the Vampire High Council, he can never reveal his true self to John.

John Reeder can’t control his attraction to the sexy Italian baker. But as addictive as the sex is, John can’t overcome his fear of rejection for being gay, and open his heart to a man with so many secrets.

Review:  This is a great start to a fun and sweet paranormal series.  While this is a vampire story with some strong world building and backstory, I found it to be light and charming.

Vincent is haunted by his past and the choices he has made. The bakery and human life feel like nothing but a punishment until John is comes crashing into his life. Suddenly all Vincent can think about is one sexy, confusing and closeted cop and not even murder investigations, vampire politics, or his own conflicted heart seem to be able to stop the building need to have John in his bed and in his life.

John is a good cop, which means he is caring, curious and suspicious. Two of which can get him and possibly Vincent killed if he doesn’t stop asking questions and looking into Vincent’s past. John’s close ties to his family anchor him and he is terrified of their response to his sexuality. I loved his sister and their relationship. Being an out and proud police officer does not seem like an option, but the irresistible pull towards Vincent is leaving him on edge and defensive even as it draws him deeper into a relationship he’s sworn he’ll never have.

While Vincent has strong allies there are those who would use his new relationship with a human to destroy any hope of him ever making peace with his people. What is a vampire to do when he is pulled between the instincts and desire of a trained human investigator he can’t seem to stop falling in love with and his people who would demand his lover’s death if he learns the truth of their existence? Vampires do not mate with humans.

These men dance around each other throughout the story. They can’t seem to stay away, but neither can they seem to stop fighting, and the lack of trust and communication on both sides seems to mean that a lasting relationship is doomed. Except for that spark that won’t go out, not just the sexual but the emotional connection and their genuine interest and caring for one another.

I couldn’t help but want these guys to find a way to make it work. Even if I did have moments of wanting to bop John for his stubborn fear and his tendency to lash out at Vincent. Vincent’s past and the huge secret weigh heavy on him and their hopes for a future together, but I think these men are going to make it. Somehow and maybe despite themselves, the connection seems to have a deeper meaning than we have yet learned. I am excited to read the next books to find out how they manage to deal with all the craziness that we know is coming.