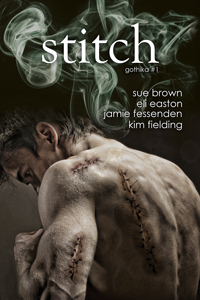 When a certain kind of man is needed, why not make him to order? Such things can be done, but take care: Much can go wrong—but then, sometimes it can go wonderfully right. Imagine…

In The Golem of Mala Lubovnya, a seventeenth century rabbi creates a man of clay to protect the Jews, and the golem lives a life his maker never imagined, gaining a name—Emet—and the love of a good man, Jakob Abramov. But their love may not survive when Emet must fulfill his violent purpose.

In Watchworks, Luke Prescott lives as a gentleman in a London that never was. His unique needs bring him to famed watchmaker Harland Wallace. Romance might blossom for them if Harland can come to terms with loving a man and keeping him safe.

In Made for Aaron, a young man in an asylum for being gay met the love of his life, Damon Fox. Twenty years later, Aaron thinks his life is over when Damon dies and then disappears from the hospital. Aaron is determined to find the truth, but secrets hide the unthinkable.

Reparations unfolds on the harsh planet of Kalan, where weakness cannot be tolerated. When Edward needs help, his life becomes entwined with exceptional cyborg slave, Knox. But when Knox remembers things he shouldn’t know, the two may pay a blood price for their taboo alliance.

Review:  This is a fantastic anthology. Every author added a story that I enjoyed. While expressed in individual ways and differing stories, there are elements of tragedy and a very human horror that run throughout the anthology as a whole. The agony of being denied humanity, the hope of life and creation, the essential need for acceptance and the ecstasy of love. And as every human must learn, the importance of forgiveness, both of ourselves and those who have wronged us.

While each story was very good in its own way there were a couple that struck a chord for me and for those I had to say a little bit more. I’ve reviewed them according to the order they appear in the anthology.

The Golem of Mala Lubovnya by Kim Fielding is utterly gorgeous. The melancholy beauty of the writing and narrative reminded me of her other story, Brute. Emet is aware that he is not human, not a man, lacking a soul and created to protect his people and obey his master, the rabbi. But he feels, he thinks, he is filled with curiosity and questions, he desires and he loves. He sees beauty all around him and he wants to be human with a fierceness that made me ache.

“What do you want?” Jakob asked.

Emet’s throat felt tight and it was hard to answer. “I want to be real. A man. I want… I want a house and friends and family. I want to work hard, and at the end of the day I want to sing my thanks to God, and then I want to go home and laugh with people who… who care about me.” Oh, he wanted those things so badly that each word pierced more painfully than Jakob’s chisel—but these wounds didn’t heal.

The love story here was just transcendent, of any and all constraints and bias, of the very laws we believe govern not only humans but nature itself. Jakob sees Emet. It was Jakob who named him, who taught him, became his friend, accepted him and loved him just as deeply and passionately as Emet loved Jakob. I can’t properly put into words how much I valued the love between these two.

Chewing his lip, Emet tried to frame his words carefully. “In the Song of Songs, they loved each other with their souls. But I think maybe… maybe it’s possible for a creature without a soul to love. When I heard you singing yesterday, it was as if something stirred inside of me. A heartbeat with no heart. Is that what love feels like?”

“Love feels like a heavy stone in my chest, so heavy I can’t breathe. But oh Blessed Lord, I can’t live without that stone.”

This story made me cry, both the sad and the happy tears. It is one I will remember and return to read again and again. Highly recommended.

Watchworks by Jamie Fessenden is a deceptively simple tale. A man who seems rather alone in the world, with his love of clocks and their repair and maintenance filling up his world. When he responds to a summons for his services he finds himself overwhelmed and becoming increasingly confused and horrified as he is pulled ever deeper into a world that he could never have imagined. Torn between fascination and terror he must keep his head and follow his heart if he is to find any peace or happiness again.

Harland has to let go of his fear over loving a man and all the repercussions of that, as well as the nature of Luke’s needs and history. Harland had to grow so much in a short amount of time. He had to get over his fears and prejudices and take risks. If he doesn’t then Luke may be lost forever.

This story is sweet and dark and beautiful. The development of the characters was well done and I was impatient with Harland to hurry up and deal so that he and Luke could be together already. Harland’s fears and horror were genuine and he dealt admirably with them. I don’t know how well I would have been able to handle everything that kept coming at him.

Reparations by Eli Easton is tremendously good. The building tension between Edward and Knox was intense and very well done. The little pieces that kept niggling through his shattered mind as Knox connects to Edward and through that connection, to his own humanity. The world building was great for such a short story. The harsh and unforgiving landscape that surrounded them was vivid from the first pages.

I pitied and felt an understanding for Edward, lost and confused and not meant for the world he inhabited. Everything on the farm, on Kalan, was a struggle for him in different ways. He was too smart, too kind and utterly alone, he always had been.

I fell a little in love with the tragic Knox, so literally broken. He was a stranger to himself. Each piece that was revealed to him was more painful and disorienting than the last. My heart ached for him, never sure what was real, what was memory, what was programming, what was the man who stood here today. What would become of this strange and horrible creation?

There were so many things that could go wrong that I wasn’t sure what was going to happen for these two. So many ways for everything to come crashing down around them. They are driven to break so many of the rules and laws of their world in an attempt first to survive and keep the farm and then because they want to. The men’s loneliness was so deep that I almost felt I could reach out and touch it. They needed each other in so many ways. And their fates are as cruel, harsh and unforgiving as their planet, Kalan. Only hope, forgiveness, trust in each other, and a shit-ton of love will see them through and maybe allow them to survive.

Don’t say it, Knox thought. Don’t give your heart to me. For as much as I’d treasure it, I don’t deserve it and it would ruin you.

To keep the words from being said, either by the too-generous Edward or by his own weak tongue, Knox kissed him. He kissed Edward until there were no more words waiting between them.

I ached along with these men. I puzzled through the fragments of memory and knowledge with Knox as they would appear. I was entranced with the gentleness and sweetness of their growing regard for each other. I mourned with both men as they struggled through the impossibility of their forbidden love. I yearned for their impossible happy ending.

Made for Aaron by Sue Brown is an emotional journey into obsession, abuse, grief and a love that transcends any boundaries or programming. I found myself captivated by the story and intrigued by the concepts.

Aaron was put in an asylum when he was a teen for being gay and suffered greatly through “therapy to cure his homosexuality”. Damon was his savior, both during his time inside and once he was out. They built a life together of just the two of them. Damon was all that Aaron needed, it was like he had been made just for Aaron.

His time spent in the asylum during a critical time in his development made Aaron very uncomfortable with authority and made it difficult for him to make decisions by himself. He was dependant on Damon’s steady strength and when that was ripped away from him he found it painful to cope with the realities of life. As things continue to spiral out of control Aaron begins to question if he wants to live in a world without Damon.

“Damon… he was mine, like he was made for me. He was everything I needed. I thought I was all he needed. It was bad enough knowing that he’d been injured, and then they tell me he was dead. But seeing him walk out of the hospital and he didn’t come back to me.” Aaron drew a shuddering breath. “He’s destroyed everything I loved, the fabric of my life.” He walked for a while, unable to speak for the thick lump in his throat. “I wasn’t enough.”

Aaron, sweet and gentle man that he is was completely unprepared to deal with the loss of Damon. He is plunged into a world of confusion, loss and grief. It was painful to watch him struggle through this strange world, unable and unwilling to cope. He is shattered and feels betrayed. But Aaron has more stubbornness, strength and intelligence than he gives himself credit for. And he might be the one to find a way to solve the mystery and set the world back to rights.

These stories are all darkly beautiful. They won’t be for everyone. But for those who choose to enter these worlds you are in for a treat. I found them each compelling in their own way. A couple I fell in love with and will be revisiting for years to come, but all of them left me aching for the awesome creations and the men who loved them. And intrigued and grateful for the spark that comes with creation.