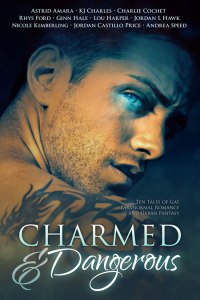 Rhys Ford  – Dim Sum Asylum
For Detective Roku MacCormick, working Arcane Crimes is his passion. Now cleared of any wrongdoing for shooting his last partner, MacCormick is given back his badge… as well as a new case and partner. Trent Leonard isn’t exactly what he’d expected, but then nothing in San Francisco’s Chinatown ever is.

Ginn Hale – Swift and the Black Dog
When Jack Swift killed a tyrant and won the revolution he became a national hero. But someone in the new government prefers dead heroes to living, swearing, cynical wizards. Caught between bullets, revenge and desire, Jack had better be swift indeed.

KJ Charles – A Queer Trade
Apprentice magician Crispin Tredarloe returns to London to find his master dead, and his papers sold. Papers with secrets that could spell death. Waste paper seller Ned Hall can’t resist Crispin’s pleading—and appealing—looks. But can the wasteman and the magician prevent a disaster and save Crispin’s skin?

Jordan Castillo Price – Everyone’s Afraid of Clowns
Psychic medium Victor Bayne can spot a ghost any day of the year, but Halloween holds some special surprises. His psych-groupie boyfriend Jacob coaxes him to the location of an old spirit sighting, but they can’t ghosthunt without enduring a cheesy “haunted house” that’s even more disturbing than they realize.

Jordan L. Hawk – The Thirteenth Hex
Hexman Dominic Kopecky doesn’t understand why dashing crow familiar Rook wants his help investigating murder by patent hex. For one thing, Dominic isn’t a witch. For another, the case is already closed—and someone is willing to kill to keep it that way.

Charlie Cochet – The Soldati Prince
Riley Murrough goes from serving lattes to being chased by demons. If that wasn’t bad enough, he bears the mark of a shapeshifter king from a magical realm. Riley’s determined to get answers, but if the demons out for his blood don’t kill him, the urge to strangle the arrogant king might.

Lou Harper – One Hex Too Many
Veteran detective Mike Mulligan is an expert on violent crimes—of the occult variety. He might even be cursed. Detective Hugh Fox is eager to partner up and prove himself, but Mulligan is accustomed to flying solo. Can they trust each other enough to track a killer who’ll stop at nothing, not even summoning a demon?

Astrid Amara – The Trouble With Hexes
P.I. Tim Keller has a problem. And the only person who can solve it is his ex-boyfriend, Vincent, whose job as a hexbreaker was the reason they broke up. It’s hard admitting he was wrong, especially when coughing up organs. But there’s a missing person to find, a hexmaker to hunt down, and a romance to repair before Tim breathes his last.

Review:  This anthology is awesome! Every story is one I will read again. Some give us experiences in favorite series. Some need to become series. I enjoyed each moment I spent reading this collection of supernatural tales. There is something for everyone who enjoys magic and love. Highly recommended.

Dim Sum Asylum by Rhys Ford is genius. It opens with a bang in an alternate San Francisco full of magical creatures. There are dragons, people! Narrated by Roku MacCormick, a human/fae cop with a haunting past who gets a new partner, Trent Leonard, who has some secrets of his own.

Hard edged with curls of grief and violence that combine with the eye for detail and classic Rhys Ford humor to turn a short story into world that I want to wallow in and earn a permanent pass to visit.

I love the fae and all of the magical creatures that live side by side with humans. The world building is incredible. I feel like I should be able to step into this fascinating universe and see the dragons on the gates, smell the smoking ducks. This needs to be an introduction to a series. It feels like a beginning and is highly addictive. I need more. Rhys Ford has once again created a masterpiece of sexy men, intrigue, violence and the beautiful ache of being alive.

Swift and the Black Dog by Ginn Hale is dark and grey. Corruption, loss, betrayal, plotting, murder and revolution. Wizards, propaganda, folk heroes and Magic. Jack was a revolutionary who left it all behind when they won, sinking back into the shadows that had born the band of misfits who changed his world. When he’s pulled back into a new struggle by past compatriots he fights it every step of the way.

There is a bleakness to Jack that is balanced by the shiny, cheerful hopefulness of Finch. I don’t know how much of the darkness in Jack is real and what is guilt and grief. War is never simple and it always leaves scars and wounds that cannot ever heal completely. But Finch shines so bright for Jack. They create something together that I enjoyed.

While it’s gritty and sad there is a strong element of hope and redemption that weaves through this short story. I enjoyed this one.

A Queer Trade by KJ Charles is a small adventure set in the Magpie universe. While we don’t see our favorite guys, it’s nice to visit a familiar and treasured place. I always enjoy KJ Charles’s writing and world building.

Things quickly escalate out of control and everything is flipped on its ear before Crispin and Ned are able to find their way out of this magical mess. While Crispin loses much he gains even more and maybe even finds the companion of his heart.

I like that one of the main characters is a man of color in a place and time that being a man of color who was also homosexual made for a very lonely and potentially dangerous life. While the men are very different on the surface once they get to know each other they quickly find that they are actually very compatible in all the ways that matter.

Magically Delicious by Nicole Kimberling is a fun romp. I had a good time reading this. It’s not so much laugh out loud funny as silly, sweet and very charming. Keith’s inadvertent sidekick was cool and added to the humor.

There is a mystery to solve and when human investigator Special Agent Keith Curry’s transmogrified goblin boyfriend, Gunther becomes one of the victims Keith knows he has to find out what is happening and stop those responsible.

The relationship between Keith and Gunther is sweet and I enjoyed their interactions and the compromises that would need to occur with such different beings. There was a sense that they were in this for the long haul and both were willing to adjust to make that happen.

Everyone’s Afraid of Clowns by Jordan Castillo Price gives us a mini-adventure with our favorite Psycops. A ghost story leads to a trip down memory lane and gives Victor and Jacob a Halloween night they’ll never forget.

Victor and Jacob suit each other well. All of the quirks and neurosis that make Victor a special boy madly flip Jacob’s switches. And when they share energy the power they create between them can get very hot.

Fun and charming with that element of dark that makes Jordan Castillo Price an author that stands out among the best.

The Thirteenth Hex by Jordan L. Hawk occurs in a world of witches and familiars. I really enjoyed this story of hope, love and mystery. Two stubborn men who want to solve a case that everyone keeps telling them is already solved.

What happens when you know that you’re magic but are told that you aren’t? You become the next best thing and work as closely to your dream as you can. What happens when an intriguing beautiful man shows up and asks for your help? You help him in any way that you can.

There is a lot of hope and faith in this story. The sense that you have a greater purpose and have to stay true to yourself. That sometimes you need a little help finding your way.

This is a sweet story with a mystery, some danger and a sexy romance. I was rooting for our hex maker and his new familiar friend. I really enjoyed this one.

The Soldati Prince by Charlie Cochet brings us into a world of powerful, magical warriors who shift into tigers. There is humor and the humbling of an arrogant King. Love is a great equalizer and will bring even the strongest to their knees.

One day Riley is a starving artist supporting himself as a barista the next he’s pulled into a magical world where he’s a destined prince meant to mate a king who has no interest in a puny human. Let the adventures begin.

I really liked Riley, I even liked Khalon when he could get over himself long enough to show who he truly was. Thankfully they have the help of Khalon’s second, Raynor and a certain foxling who both support and provide the voices of reason and patience. I would love to see more stories set in this world.

One Hex Too Many by Lou Harper is a story of cops with magic who deal with crimes of magic. Detective Mike Mulligan might or might not be cursed, it depends on who you ask about the six partners he’s lost in the last five years. When he’s assigned the task of showing the new rookie the ropes of magical police work things get interesting.

The relationship between the men develops as they work together to solve a murder. While trust begins to be built there is more going on with both men than they are willing to tell each other. If they want this partnership to work they will have to find a way to open up and share.

I loved this world and the Extramundane Crime Division. Leslie is a hoot and his antics had me chuckling and intrigued by the story I feel is behind the magic he used to hide himself.

Josh of the Damned vs The Bathroom of Doom by Andrea Speed is a small adventure of Josh and Colin and Doug. Doug cracked me up and he was very helpful. I enjoy Josh’s voice and the crazy life he leads.

There is a whole series set in this world and it’s a blast. If you aren’t familiar you will still be able to enjoy the zany hijinks of Josh, his sexy vampire boyfriend, Colin and his roommate, Doug as they battle evil that is trying to take over the Quik-Mart.

Recommended for those who enjoy a little supernatural flair with their humor.

The Trouble with Hexes by Astrid Amara  is a story of rekindled love. Being madly in love was never the problem between Tim and Vincent. Secrets and doubts were what drove them apart and when Tim shows up dying from a nasty hex Vincent will have to swallow his hurt and anger if he has any hope of saving the man he’s still in love with.

Tim and Vincent are adorable together. Both stubborn and sweet. They’re good men who made wrong choices and paid the price with their relationship. They have a second chance now and if they can let go of the past they might have a happy future.

Fun, romantic and sad this short story pulled me into their world of hexes and mysteries. There is so much love between Tim and Vincent and it was tragic that they allowed things to get so bad in their relationship. Luckily the six months they spent apart has made them realize just how much they love each other. Now they have to figure out who hates Tim enough to lay such a nasty hex before time runs out and Tim dies.