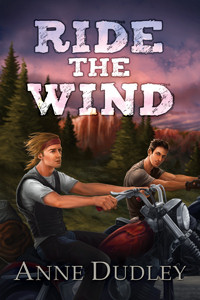 Blurb:  Alex Durant lives in a room behind the motorcycle repair shop where he works as an underpaid mechanic, bullied by his boss. There’s a truth he’s ignored most of his twenty-three years: men on their bikes turn him on, not women on the pin-up calendars that line the shop walls. It’s during a well-earned vacation to Sturgis, South Dakota, to attend the motorcycle rally where he comes face to face with his truth.

He meets the confident and outgoing Jordon Baker, who races motorcycles as a career. Alex is overwhelmed by Jordon’s incredible smile and kind eyes and his need to live life to the fullest. In the week they spend together, it’s Jordon who shows Alex things he’s never experienced: concerts, races, and the stars. It’s Jordon who shows him that two male bodies can ignite in pleasure when they come together. By the end of the week, Alex sees in Jordon’s eyes what he feels in his heart, and the truth of that scares him to the core.

But Sturgis week has ended, and Alex is back to the grind. He’s now stuck with making a difficult choice: continue to live his sad life alone and in hiding, or live his truth with the man who has big eyes for the world.

Review:  Swoon, swoon, swoon my heart went Zoom! I really liked this book, as a Brit I really enjoyed the dialogue it was fun and well written, giving me a real feel for the characters and their environment. The buffoonery between Alex and Jordon made me laugh and their emotions tore at my heart. These guys are hot together and for each other.

Alex is a diffident young man, who is cautious of his feelings and his social surroundings. Knowing what he wants scares him, causing him to have splenetic outbursts, then he tries to play it cool when his emotions run high to hide his disconcertment. Alex prefers to be left alone to deal with his emotions and work through issues his own way, but doesn’t rule out any advice given to him by those he trusts. This I feel shows Alex’s strengths, despite his heart telling him to jump right in, he follows his head. Alex’s attitude kept me on the edge, I really liked him and was captivated by him the more I got to know and understand him.

Jordon is naturally outgoing and experienced, he is sure of his feelings and resourceful. He has determination and lives life to the full, challenging whatever is thrown in his way. I easily liked Jordon with his easy going friendly approach dealing with any challenge with a wink and a smile. For me he is a fun daredevil character who I would have liked to have known more about.

Although Alex and Jordon appear to have conflicting and differing perceptions about how their relationship should run, there is a strong pull between them. Jordon carries very positive connotations for their future together, but can he pursuade Alex to make the necessary steps take charge of his life.

Good secondary characters with Augie being the condescending and controlling boss and Zeke being the father figure and best friend giving Alex focus and support.

I recommend this fun rock-on romance novel with two ‘hard up, hard on’ biker guys!