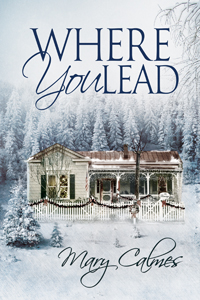 Title:  Where You Lead

Blurb:  ATF agent Peter Lomax isn’t a hearts and flowers kind of guy, but he can be possessive, and it caused problems until Carver Fleming. Carver may be part of the art world, but he gets Peter, loves belonging to the man, and Peter treasures the way Carver understands them together.

Carver loves Peter, but he’s fully aware that six months doth not a commitment make. Carver wants to make the relationship last forever, but he’ll have to leave their life in Chicago to take care of the family he loves. He wants to do it with Peter by his side, but going from the city of Chicago to tiny Colt, Kentucky is a big change.

Beans:  I love stories that show what happens after the first, I love you. These men love each other, that isn’t in question. The question becomes, can they sacrifice for the other one? Is their love enough to endure change?

Peter is captivated by Carver. He has been living a hard life as an ATF agent and he loves his work. He is more than capable. His family is his work partner, his partner’s wife and now Carver. The anger and pain that the man he has fallen completely in love with, might be moving, is heartbreaking. He needs Carver and he knows it, but he doesn’t know if that is enough.

Carver knows that Peter is the one for him. He knows that even with the monkey wrench he just threw down, that his Pete will be part of his life. He just doesn’t know what that will look like. But what I loved was that he was willing to do anything to get as much as possible. Carver was going to fight. He finally found the love of his life and he wasn’t going to settle for anything less.

The main characters have so much depth for such a short story, and then Carver’s family was enchanting and beautiful. It was a fantastic read. Full of beauty, growth, and a love being lived out.

Nina:  So much more than a Christmas novella.  A fabulous story about family, love, commitment, relationships, and the choices we make that make or break them.

Carver wants to stay with Peter, he loves their life together in Chicago, but he has to go home to help his family.  He wouldn’t be the man that Peter loves if he wouldn’t want to be there for them.  He knows that convincing Peter to join him will be a challenge and he also knows that Peter is worth whatever he has to do to keep him in his life.

Peter loves Carver.  He isn’t a soft or easy man, he is a warrior, he doesn’t let many people in and when Carver worked his way in and took up residence in his heart and life it was forever.  He doesn’t know what to do about Carver’s sudden decision to leave him and their life.  He feels betrayed and lost and angry.  He feels like he is being abandoned.  Until Carver and his family start to work their magic on him.

I really hope that we get to spend more time with these guys.  While the story is told wonderfully and does not feel incomplete, I want more.  They were beautiful and there is so much more that can be said about them.