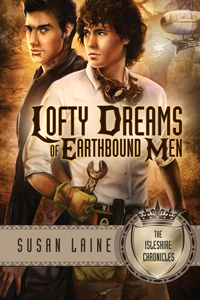 On the night of the summer solstice, Obadai Bashim encounters Jules Sterling, a young engineering sage. Jules is on the run from a ripper, an assassin of the Theocracy who has already killed his master. Open atrocities by rippers are unusual in County Isleshire, where freedom and acceptance reign over prejudice.

However, political instability between the Five Kingdoms and the Divine Theocracy has set the theocrats on a mission to crown religious doctrine over science, and the Sage’s Guild is number one on their eradication list. If Obadai helps, he’ll have a price on his head too, but he can’t abandon Jules.

Escaping the ripper’s clutches is not enough. Jules has a mission of his own: to repair a faulty airship inn about to crash into the fortified township of Dunbruth. Luckily, Obadai has a few magickal secrets up his sleeve.

Review:  A short but extremely busy read. There is so much to take in for a short story, maybe too much. Now it’s not that I didn’t like it, I truly wished there had been more length to it.

I didn’t feel there was enough time to get to know the characters well, although I can tell you where they were from that they were a young man and an older man that one is a sage engineer and the other is a mystical witch. Both equally talented within their trades, and lovers of men living in a magickal world, and that they met under dire circumstances. I liked both Obadai and Jules, and would like to have spent more time with them.

There are plenty of descriptions relating to castles, floating islands, mythological Goddesses, countesses, Kings, scientists, Patron saints and many more are mentioned throughout this tale.

Some very creative characters and places too, I felt somewhat disappointed with it all ending so quickly before I had a chance to take it all in.