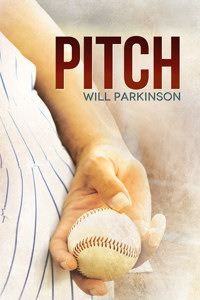 The day Jackson Kern walks into Taylor Andrews’s classroom is a momentous day in Taylor’s life. He’s had crushes before, sure, but as time goes on, this is starting to look a whole lot more serious. Still, Jackson doesn’t return Taylor’s feelings.

Taylor has his own admirers, though. Kevin Richards is used to getting what he wants, and what he wants right now is Taylor, so when Taylor rejects him, Kevin retaliates. At first Taylor’s entourage rallies around him, but then Kevin takes his deception one step further and Taylor sees his support dwindle, teaching him the valuable lesson about who he can truly consider a friend.

Review:  In full disclosure mode, let me start by saying that I didn’t want to like this book. Why, you ask? Well, for the last couple of months there’s been a new kid in town: Will Parkinson. Authors have been naming characters after him, praising him, long dedications have been seen and I felt like enough was enough. Who is this Will Parkinson person? Why, all of a sudden, does everyone love him?

You see, the answer to those questions is written all over Pitch.

Will Parkinson is an amazingly talented new author in our genre, and he deserves all the *winks* and nudges he’s been getting.

Pitch is one of the best YA LGBT I’ve read, Jackson & Taylor’s love story is plain and simple. Beautiful and naive. Innocent until evil comes to hunt them, first being the obstacle in the form of a mean girl and then in the form of a crazy stalker with a very unhealthy obsession.

Jackson is new in school, and Taylor’s fixation starts from day one. The arrival of Jackson to school gives him butterflies. Taylor starts following Jackson around, to practice and games, taking part in the student committee activities to be close to the new elected President Jackson. And it all seems to be one sided, when in reality it is miscommunication and some selfish acts by the mean girl.

Crazy stalker Kevin only adds to the madness and the angst these two boys are going through.

The mistakes they make, the way they grow together, the development of their relationship… all was done with perfect timing. The lack of sex on page was another reason to love the book and Mr. Parkinson. These are teenagers, growing up, discovering, exploring, understanding, making mistakes, being silly and being responsible the next moment.

Both, Jackson and Taylor are very mature for their age, but still act like young men. And that is perfectly fine.

Before I go on and on about them, there is one very important character in this book that deserves all the stars, and that person is Benny, Taylor´s BFF.

What an amazing character we have here, so caring, so protective of Taylor and fun to be around. A mix of BFF, big brother and boyfriend without benefits kind of thing. Benny deserves his own book, please Mr. Parkinson, I’m begging you here. One, just one quote that will describe him…

“Because, you idiot, you’re my best friend. I love you. You´re hurting, and that makes me hurt.”

The bond between these two brought tears to my eyes on more than one occasion. And both, Taylor and Jackson, were so lucky to have Benny by their side.

Pitch will go into my favorite reads of 2013, without a doubt. And I highly recommend you read it too. If you have teens in the house is a great read for them too, or for us, the young at heart, that enjoy reading about boys falling in love, overcoming adversity and being supported by family and friends.