The Half of Us (Family: Book 4) Audiobook 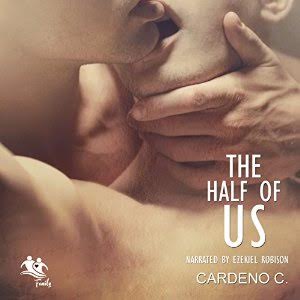 Blurb:  Short-tempered, arrogant heart surgeon Jason Garcia grew up wanting a close-knit family, but believes he ruined those dreams when he broke up his marriage. The benefit of divorce is having as much random sex as he wants, and it’s a benefit Jason is exploiting when he meets a sweet, shy man at a bar and convinces him to go home for a no-strings-attached night of fun.

Eight years living in Las Vegas hasn’t dimmed Abe Green’s optimism, earnestness, or desire to find the one. When a sexy man with lonely eyes propositions him, Abe decides to give himself a birthday present – one night of spontaneous fun with no thoughts of the future. But one night turns into two and then three, and Abe realizes his heart is involved.

For the first time, Abe feels safe enough with someone he respects and adores to let go of his inhibitions in the bedroom. If Jason can get past his own inhibitions and open his heart and his life to Abe, he might finally find the family he craves.

Review:  I really enjoyed listening to this book. Having already read the ebook version and falling in love with the characters and story it was wonderful revisiting it in this form. It was great to be able to enjoy the story all over again while driving, washing the dishes, walking, running errands, and even lying in bed. Ezekiel Robison did a fantastic job narrating this story. I couldn’t be happier with the pacing or clarity he gave the book. Ezekiel Robison developed a “voice” for the two main characters so that after a while I knew who was speaking based on their voice. He even had voices for secondary characters that allowed me to follow along without having to refer to the print version.

Jason is a man stuck in a destructive place where he works, spends a nominal amount of time with his family, sleeps, and picks up random and meaningless tricks. There is a feeling almost of self punishment in much of the what he does, including his one pleasure – sex. He feels a huge amount of guilt for past mistakes and internalized homophobia. He failed at his attempt to be “normal” so he could have a family and he can’t forgive himself for not being able to be the man that he wanted to be, no matter how hard he tried.

When Jason meets Abe he is mesmerized by this shining, happy man who is so open and caring. I loved that it was Abe’s laugh that first caught Jason’s attention. When Abe meets Jason he is overwhelmed by the sexy alpha male and breaks all his dating rules, throwing away his inhibitions and giving in to his most secret carnal desires. While the chemistry between the men is off the charts hot, there is so much emotion that quickly develops. Friendship, shared interests, they genuinely like each other and laugh together a lot, both of them enjoy the peaceful life they are slowly creating together. Abe helps Jason to let go and enjoy the moment and not take himself so seriously all the time. Jason helps Abe to feel confident, sexy and assert himself and his desires.

Which brings me to one of the things that make this such a beautiful story. Jason changes, not to win the guy or because of outside pressure or ultimatums, Abe doesn’t actually try to force Jason towards anything. But because Jason experiences a love, affection, laughter, peace, intimacy, pleasure, a life, that he truly believed was impossible to have with another man. Without him fully realizing until he was already living it, he had a life he enjoyed and was well on his way to becoming the father, and the man that he had always wanted to be. Because he finally began to accept himself and his sexuality and believed that he was that man. That he was allowed to be gay and happy, that men can love each other just as fiercely and as well as any heterosexual couple he had ever admired and envied. And the best part was that we were along for this process so it felt natural and genuine.

I deeply appreciate that Cardeno C respects the women in their books. The ex-wife is a lovely woman and an excellent mother. She isn’t a doormat or a bigot. She’s dealt with the betrayal of a homosexual husband with grace, dignity and forgiveness, she refuses to allow any lies or shame in their family. I adored her and the relationship that she and Jason have. She couldn’t have been sweeter to Abe, nor better facilitated his acceptance into the family.

I always have a wonderful time when I step into a world created by Cardeno C and this audio version allowed me to experience it in a new and fun way. I highly recommend this book in any and all formats.