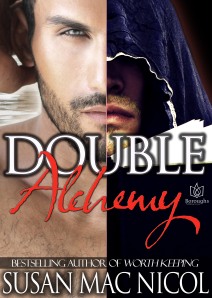 Blurb:  Powerful yet tormented modern warlock Quinn Fairmont must initiate the silver-eyed Cade Mairston into the world of witchfinders, Withinners, and what can happen when two men fall truly, madly, deeply in love.

THE WORLD IN SHADOW

In modern London there lurks a warlock, Quinn Fairmont. Dangerous, powerful, tortured, sharing his body with the soul of an ancient Welsh sorcerer, Quinn is never alone—and never wholly himself. He fights against all those who would exploit his kind. He takes pleasure where he can find it.

In the forest of Hampstead Heath, Quinn’s hometown, Cade Mairston appears to him like a waking dream. Lithe, lean and silver-eyed, he evokes feelings in Quinn unlike any other: lust with true affection, immediate and shocking. Cade is clearly more than he seems. And yet, if a man of the world, Cade is innocent. He knows nothing of warlocks, witchfinders or Withinners. He knows nothing of what he is, what he might be, or what he might feel. For him, the story is just beginning. Magyck, peril and passion await. More awaits in book two…

Review:  A magyckical tale of passion, love, secrets and surprises. Present day Warlocks, Witches, Water Sprites, with Sorcerers and Withinners of centuries past, fight to keep charge of their world concealed from human civilisation. A battle between two warlocks over lost loved ones, makes for a story of bloody revenge. Pursuits to capture and rescue take place, risking love and life to win.

Quinn mid thirties, six foot plus hunk known in the human world as a wealthy book collector and philanthropist, behind closed doors in the world of magyck he is a great Warlock with a Withinner, Taliesin from the sixth century. An interesting and complicated relationship between Quinn and Taliesin, tied to each other until death claims one of them, they share time and body, as well as their memories, thoughts and emotions.

Cade also mid thirties, handsome man with a powerfully built swimmer’s physique. He is a cultural anthropologist, living on a houseboat with his cat Marco Polo. Cade has no knowledge of the magyckal world that awaits him, with an intense love relationship and new life. Cade becomes embroiled with the battle of the Warlocks, leading to the discovery of his true heritage.

Quinn and Cade’s relationship is steaming hot. Quinn unlocks something in Cade and despite his attempts at keeping Quinn at bay, he is defeated as his raging desire for Quinn increases beyond his control, leaving Cade feeling angry and confused. Quinn does his best to reassure Cade that their behaviour towards each other is a natural occurrence, something that neither one of them can prevent.

Cade is led on a magyckal path of fear; love and consequence as this new world is slowly revealed to him. Cade learns of the persecution and victimisation amongst Quinn’s kind, the brutality of their magyckal world which can lead to devastation and loss. Quinn tries to hide Cade’s true origins from him, but why? Quinn loves Cade and naturally wants to keep him safe, but could this be Quinn’s undoing? Their relationship has not gone unnoticed by Quinn’s enemy and traitor of their kind.

I enjoyed this read, with plenty of action, mystery and paranormal events. Some splendid  secondary characters adding to the story. I’m looking forward to book two.