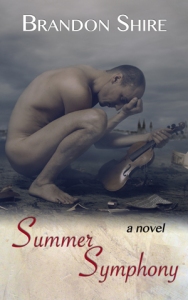 Blurb:  Martin Zoric had vivid dreams of fatherhood, of a small hand pressed to his, of pink dresses and girlish laughter. Then his wife had a stillbirth and his world fell apart.

He listened to the unwanted apologies, stood by his wife as was expected of him, and kept his façade strong and firm for the entire world to see.

But does he have the strength let go and really grieve?

When Ren Wakahisa landed in Croatia he was hoping to escape the cultural pressures put on him to conform. His family wanted him to forsake love for duty. They viewed his happiness as secondary to familial prosperity.

Does he have the courage to be who he wants to be? Or, will he yield to their wishes?

Summer Symphony is the story of how two men find their answers and what they learn about strength, and grace, and the endurance of love.

Review:  Summer Symphony is a story of love and loss, a man’s perspective of what it is to lose a child, a sorrowful but endearing story. Very often and I know more so in the past a father’s emotions regarding a stillbirth were not taken into consideration as much as a mother’s. Brandon Shire has given us here the impact of what does indeed befall on men. Beautifully written as I always find with Brandon’s stories, compelling, compassionate, filled with individualism and sentiment.

Martin Zoric is a Maestro and composer living in Croatia, he is left grieving for the loss of his stillborn daughter and the breakdown of his marriage with the beautiful Mirnela. Martin is dragged along by his emotions; to be the strong husband, the Maestro in control, while inside falling apart to within an inch of his life. Despite close friendships and his passion for music it all becomes too much and his world crumbles around him. Can he come back from it all? Can he rebuild his life? Does Martin even want too?

Ren Wakahisa, a talented musician from Tokyo, Japan, arrives in Croatia to join the orchestra to which Martin is Maestro to. Ren is the last thing Martin needs right now and he is more than happy to let his friend and member of the orchestra, Filipa, take care of Ren’s time with them.

Filipa is a close friend of Martin and does much to kick Martin into touch, keeping him grounded and giving support where possible. But it’s not enough to help Martin back on his feet.

Ren has concerns of his own with a mass of complications to solve back home. Ren has an overbearing, and oppressive mother, whose intention is to force Ren into an unwanted marriage. All the while throwing the loyalty and family honour card at him. All Ren wants is live his life in peace, finding a love of his own desires and not that of his mother.

Ren soon becomes entangled with Martin’s life after falling ill on their opening night. They engage in a complex, empathetic and moving relationship. With their passion for music and their exceptional talent they share their pains and sorrows, whilst building a life-long admiration for each other.

Warning: Summer Symphony touches on the delicate subject of stillbirth that some readers may find distressing.